The Judicial Review of aspects of the handling Gary McKinnon's extradition case (but not an actual trial where alleged evidence and witnesses can be cross-examined) is taking place this afternoon and, tomorrow.

See: Gary McKinnon: Judicial Review of the CPS/DPP decision not to prosecute in the UK - oral hearing set for 2pm Tuesday 14th July 2009

Meanwhile, those of you who have been touched by Gary McKinnon's plight, and that of other British people facing extradition to the USA, and of Asperger's Syndrome or Autism sufferers, may be interested in this music track: 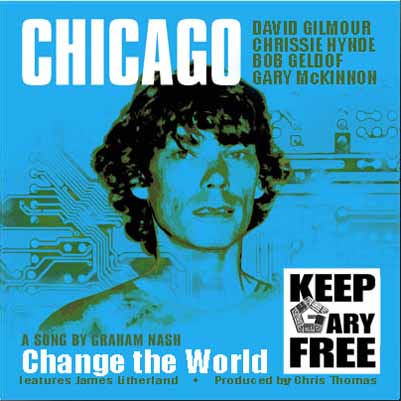 This is a Plea to Barack Obama to come from Chicago, to help Change the World and to allow Gary McKinnon to have his life back

Donations to Asperger Syndrome and Autism Causes and supporting the fight to allow Gary McKinnon to remain in the land of his birth. Gary McKinnon and every other British Citizen has the right to a trial by his peers - Gary has no peers in America.

A CD, also featuring music by other artists, will be soon be available via EMI.

Please feel free to email us your views about this blog, or news about the issues it tries to comment on:

Download our PGP Public Encryption Key, if you want to make use of it to send us anything confidential.

If you are a tv or radio or print journalist, or a freelance writer or documentary film maker, wanting to interview Gary, please include some full contact details and a contact phone number, and we will pass on your request to Gary's family.

Please also take some basic computer security and anonymity measures (e.g. Information Security for Journalists) to protect your current or future confidential sources, as you and they will inevitably be swept up by the electronic communications monitoring of Gary and his contacts by the NSA , GCHQ, FSB and other intelligence agencies around the world, which will probably continue indefinately.